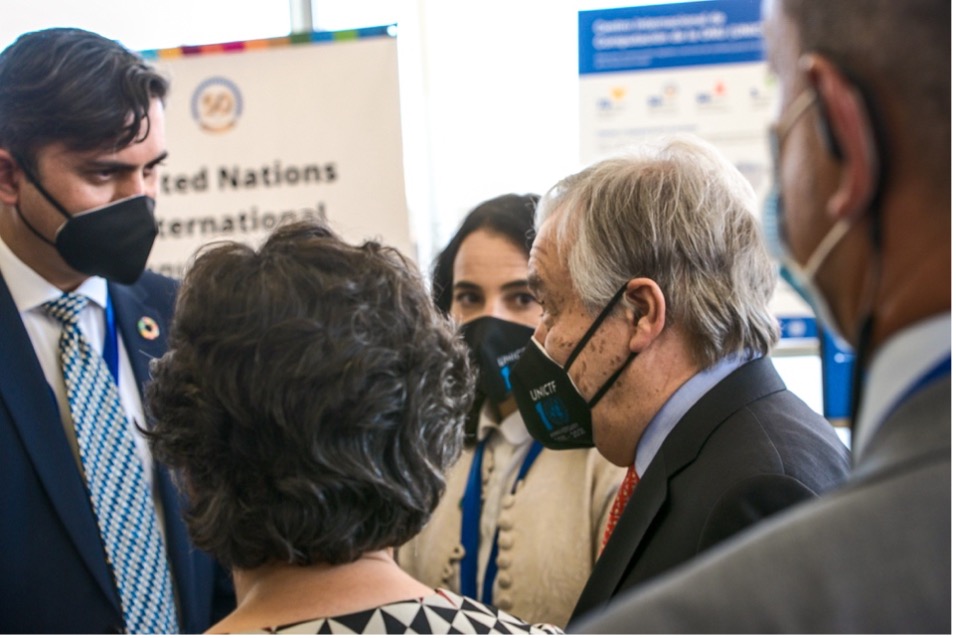 UNICC is proud to have been a part of the warm welcome to Secretary-General António Guterres to the UN Support Base in Valencia to take part in the celebration of its tenth birthday.

I’m extremely grateful for the work of my colleagues at the UN Support Base in Valencia, Spain. Through the deployment of innovative solutions and digital support, they play a critical role in ensuring we can deliver our work, around the clock and around the world.

The Secretary-General recognised the work of the people at the base, which has expanded beyond the UN Department of Operational Support (DOS, formerly DFS) to include more Agencies, including UNOPS, UNICC, and now UNICEF and IOM.

UNICC is the biggest Agency in the base (with nearly 300 personnel in its Centre of Excellence and Common Secure Operations Centre, or CSOC), and is also the biggest UN Agency in Spain. The Centre of Excellence covers many strategic areas of digital business solution delivery, from cyber security, data and analytics, innovative new technologies as well as ongoing operational services. UNICC acknowledges Spain’s efforts to provide the required space to accommodate the continuous growth of the organization.

I want to affirm our commitment to work on the expansion of this centre, attracting more and more the various United Nations Agencies to transform or to continue transforming this centre into the technological and communicational heart of the most important activities that we develop for the benefit of the populations most impacted by the difficult times that we are living.

Celebration participants included among others:

The agenda followed the Secretary-General’s itinerary. He was received in the airport by the USG and Minister of Foreign Affairs. The President of the Generalitat de Valencia, the Director of UN GSC, the Director of UNICC and the Mayor of Quart de Poblet met and greeted him.

The group walked around the cafeteria visiting the booths, including UNICC’s, where the Secretary-General talked with Sameer Chauhan, Prado Nieto, Mati Gil, Esther Ferrer, Liliana Hedges, Martina Kellen and others from UNICC.

In a separate session later that afternoon, the Secretary-General met with the youth of Spain at the City of Arts and Sciences. Among the select group of twenty youth were five UNICC interns.

Young people must have a say in the decisions that affect their future.

They held a roundtable discussion on topics including reinforcement of multilateralism to fight global challenges and COVID-19, the digital revolution, global inequality, rightful work for youth and action for climate change.

The UN Support Base celebratory event was an affirming testament to the good work that UNICC delivers to its more than 70 Clients and Partner Organizations and also provided an opportunity for UNICC to share its success stories and digital business solutions with UN leadership, the Spanish government, the UN Support Base, the town of Quart de Poblet, the city of Valencia, the country of Spain and the wider world.