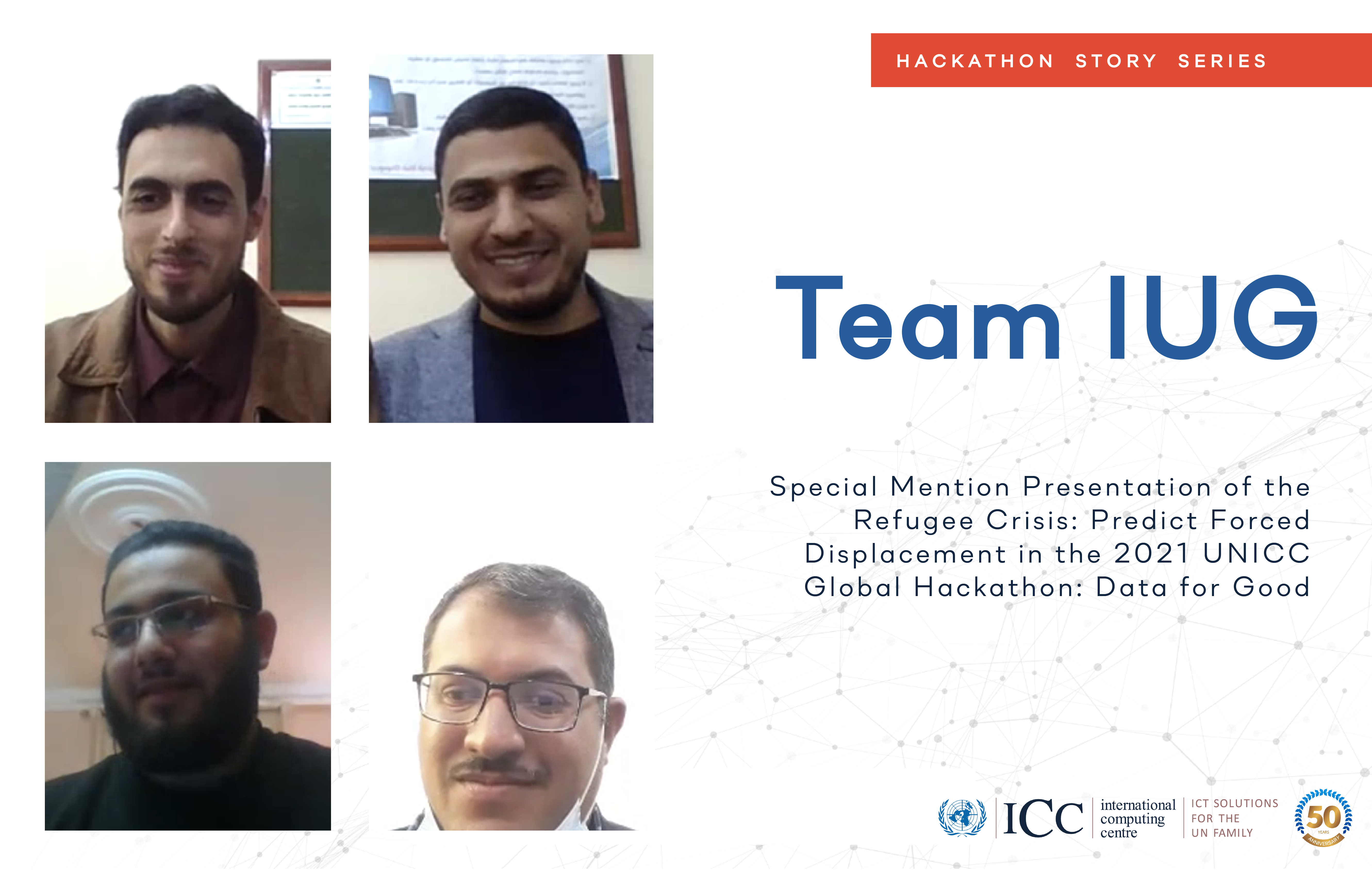 Special mention for students of Islamic University of Gaza

One of the great opportunities of working within the UN family is encountering bright minds from all over the globe. Such was the case for the 2021 UNICC Global Hackathon: Data for Good, especially the participation of Master’s students from the Islamic University of Gaza (IUG) in Palestine.

Motaz Saad, a UNICC Data and Analytics team member, Senior Data Scientist at UNRWA and IUG Assistant Professor introduced the hackathon to IUG. Together with the Dean of the School Iyad H. Alshami and the data department, he selected the top performing students in their class to join as one team. Over the next few days, Mohammed El-Agha, Abdullah Abu Nada, Ahmed Abu Amsha and Anas Alsalool entered the international competition and submitted a final solution worthy of a special mention.

UNICC’s Global Hackathon: Data for Good launched on Tuesday, 16 February 2021 with an introduction from the organization’s executive leadership to a global audience of UNICC and other UN organizations’ staff members, university representatives and over 140 students.

Mohammed, Abdullah, Anas and Ahmed opted for Challenge 2: Refugee Crisis: Predict Forced Displacement on which to build their data-based solution. In the introduction of their presentation to a group of UN judges, mentors and university professors, the team laid out the scope of their work, emphasising that the solution is not simply presenting predictions but also building an implementable plan based on those data-based predictions.

The team then presented their data sources, marking key indicators such as numbers on countries’ fatalities, terrain and geomatics as determinants of which datasets to explore, research and implement into a prediction.

Upon gathering relevant data and comparing and contrasting their findings, the team noticed a noticeable pattern in the graphs of a positive correlation between a country’s high fatality rate and its rate of displacement, especially refugees. Once this pattern was established, the team began to build their data pipeline in order to properly process their data, configure their input and output into X and Y datasets, build their model and ultimately evaluate its results.

Using Syria as a primary example for their findings, Mohammed, Abdullah, Anas and Ahmed compared the effect of the number of fatalities, caused by the nation’s social and political instability to the ultimate number of displaced populations. The time series model the team constructed from the pipeline predicted the number of refugees, internally displaced people and asylum seekers increasing in the next five years, given the continued conflict. The team also observed similar patterns in their predictions for Afghanistan and Mexico.

Following the presentation of their findings, the team evaluated them in their conclusion. One event the team specified to be related to increase in rates of refugees was the Arab Spring of 2011, a series of protests and uprisings in several countries in the Middle East. The team further explained that the fatalities that resulted from periods of political tension such as the Arab Spring are accounted for in other countries’ explanations.

Team IUG, upon presenting to the panel of judges and mentors and in an interview with UNICC, expressed interest in pursuing future opportunities in data science to tackle modern-day issues such as forced displacement.

The opportunity to present our solution with other international teams was highly competitive, but we want to be able to see this hackathon experience as not just a presentation but a means to contribute building real solutions for issues such as forced displacement and migration to make a real difference.

Team IUG’s involvement in the UNICC Global Hackathon is indicative of the 2030 Agenda for Sustainable Development, particularly SDG 4: Quality Education, and SDG 9: Industry, Innovation and Infrastructure.

This article is part of a series of stories from the first UNICC Global Hackathon: Data for Good that took place in February 2021. The hackathon drew registrations from a total of 140 students from 54 universities located in 13 countries around the globe, all of whom came together to tackle three major UN related challenges: COVID-19 Open Challenge, Refugee Crisis: Predict Forced Displacement, and the UN75 Visualisation Challenge. To learn more about this successful event and its wonderful finalists, please refer to this article here.