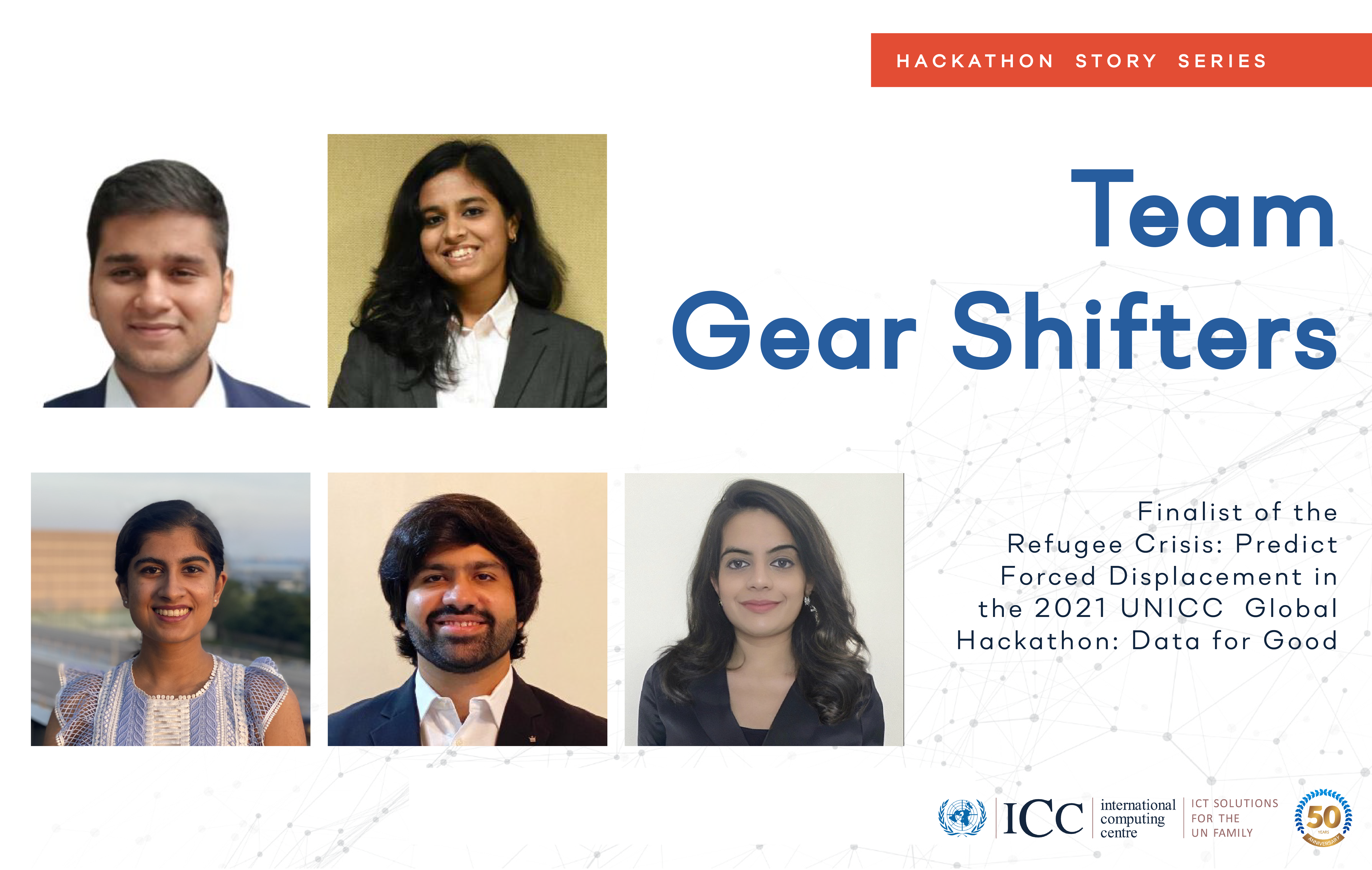 The UNICC Data for Good: Global Hackathon demonstrated a dedication to the organization’s partnerships with academic institutions, including competitive universities where bright minds of today gather to solve tomorrow’s problems.

This was true for Columbia University students Archit Matta, Plaksha Kapoor, Saloni Gupta Ajay Kumar, Tushar Agrawal and Yosha Singh Tomar, who are studying for Master’s degrees in Data Science and Business Analytics. The six students knew one another through university courses and had participated in hackathons in the past, including ones geared towards relevant social issues such as the COVID-19 pandemic.

Driven by the prospect of building models from actual data representing the realities of people around the globe – and to develop solutions towards the UN mandate – the students entered the UNICC Global Hackathon, with the team name Gear Shifters.

UNICC’s Global Hackathon: Data for Good took place on Tuesday, 16 February 2021 with an introduction from the organization’s executive leadership, with a global audience of UNICC and other UN organization staff members, university representatives and over 140 students.

Team Gear Shifters opted for Challenge 2: Refugee Crisis: Predict Forced Displacement to build a solution for their final presentation. They began by introducing their data sources: World Bank Group and UNHCR quantitative data on factors such as countries’ currency exchange rates, crisis- related deaths, population densities, life expectancies, GDP per capita – as well as news outlets such as the New York Times for qualitative data on the usage of words in articles written in the last 20 years pertaining to forced displacement and refugee crises.

With their data, the team developed several visualisations to tie key factors into a model for building out challenge solution. As an example, heat maps demonstrated correlations between Afghanistan’s and Iraq’s input factors on forced displacement. As shown below, the team presented several insights, such as a positive correlation between crisis-related deaths, asylum seekers and internally displaced people (IDPs) for Afghanistan as well as a negative correlation between exchange rates with internal displacement, asylum seekers and refugees for Iraq.

For their final model, Gear Shifters presented two different approaches: a multiple time series forecasting using an XGBOOST regressor and a time series model using exponential smoothing. From both modelling approaches, the team compared their performance based on each key factor’s R^2 value, which measures how well the dependent variable variance is accounted for, to discover that their model using exponential smoothing and random forest regressor was the most effective.

Gear Shifter solutions determined, based off their sample model using data from Afghanistan and Iraq, that the key characteristics that determine a country’s prediction of forced migration are mortality rate, life expectancy, population density and battle related deaths.

The team’s findings aligned with UNHCR’s recent report that the current upward trends in violence in Afghanistan is one of the major causes of forced refugee migration. To demonstrate the effectivity of the model, the team conducted a thorough case study of Syria: they began with a timeline of the Syrian conflict that measured the total number of Syrian refugees, asylum seekers and IDPs.

The team then cross-examined the course of the conflict and the output of their predictive migration model which reiterated the validity and reliability of their final model solution.

The extensive process of posing correct questions, researching data sets, cleaning the data, building the final model and evaluating its effectiveness came paid off when the team’s presentation was selected as one of the six finalist teams to present in front of esteemed UN judges.

Following the Gear Shifter presentation, many of the judges were impressed at the comprehensive structure and depth of the solution and posed many questions regarding ways to take their research further, such as how to take natural disasters into consideration in the forced displacement predictions.

In an interview after the Hackathon, the team noted that though there were challenges in gathering “real” data to construct a sophisticated model within the limited time frame, the opportunity to participate in contributing a tool that deals with one of the world’s greatest social causes was invaluable.

“We want to thank the mentors and their feedback as we corrected and refined our presentation. Participating in the Global Hackathon: Data for Good was unique and inspiring on many levels but most significantly because we, both as a team and as a data-backed community for the UN mission, rise by lifting others.”

This article is part of a series of stories from the first UNICC Global Hackathon: Data for Good that took place in February 2021. The hackathon drew registrations from a total of 140 students from 54 universities located in 13 countries around the globe, all of whom came together to tackle three major UN related challenges: COVID-19 Open Challenge, Refugee Crisis: Predict Forced Displacement, and the UN75 Visualisation Challenge. To learn more about this successful event and its wonderful finalists, please refer to this article here.