Women still have a long way to go before they can reach any sort of gender parity with others, in the general workforce, in technology sectors and in the data science field. Research indicates that data science is a promising career path and it’s a field likely to offer job security and growth for the foreseeable future. Women are still significantly underrepresented, though.

On 4 March 2019, UNICC took part in a significant initiative organized by Global Women in Data Science (WiDS) highlighting the growing representation of female data scientists. UNICC joined others at the Universidad Politecnica de Valencia for the first Women in Data Science Valencia, including two workshops and a panel discussion. It was an animated and interested group from UNICC, namely Elena Tejadillos, Matilde Gil, Giovanna Zanetti, Alejandro Ponte, Enrique Puij and Daniela Mezzadri.

The Women in Data Science (WiDS) initiative aims to inspire and educate data scientists worldwide, regardless of gender, and support women in the field.  WiDS started as a conference at Stanford in November 2015. Now, WiDS includes a global conference with 150+ regional events worldwide, a datathon encouraging participants to hone their skills and a podcast featuring leaders in the field talking about their work  and their journeys.

During the roundtable discussion, a common concern arose: when girls show an interest in science, technology, engineering and math (STEM) careers during their youth, the foundations might be laid for later data science work as adults. However, they often lose interest before it’s time to choose their college (even high school) courses.

Statistics below show that the gender gap in technology and data science has grown significantly over the last two decades, raising global concersn about the state of open-mindedness of the information and tech industry. 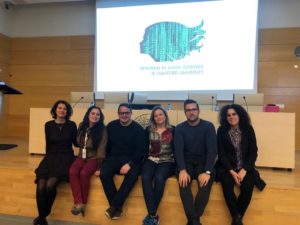 Some outstanding women in the data space

The benefits of gender diversity

Speakers agreed that the aim of gender equality in the workplace is to achieve broadly equal outcomes for women and men, not necessarily outcomes that are exactly the same for all. To achieve this requires:

Which measures for which future?

A significant debate animated the conference regarding ongoing and future measures for minding the gender gap. All speakers were questioned on such crucial themes and they underlined the importance of Libro Blanco –  Situación de las Mujeres en la Ciencia Española – discussed at the Spanish Parliament in many meetings where Cristina Aranda participated.

It was great to be here at this international conference to see ways in which women are making inroads into data science technology and what some of the questions and solutions might be. As UNICC develops its own data analytics services, it will be important to apply these issues and concerns within our own working culture, to ensure top quality, great services and gender parity as well.