PAHO and UNICC work together to develop Mia and Max bots

The World Procurement Awards, hosted by Procurement Leaders, recognize the most impressive individuals, teams, solutions and organizations in procurement.

This recognition inspires us to continue to provide innovative and efficient support to Member States. It also recognizes the organization’s ability to see challenges as opportunities, and the power of collaboration to achieve great things when we listen to countries, empower our teams, and work together.

After putting together a viable implementation roadmap, ensuring the correct architecture was in place and programming the bots, the UNICC’s RPA team started developing the two bots in October 2020.

Mia and Max went live in March 2021, as procurement became the first function in PAHO to establish RPA capabilities. With the implementation of RPA, between March 2021 and May 2022, the procurement team saved 1,660 hours committed to repetitive and non-value-added activities. Max processed 22,861 shipping documents.

We at UNICC are proud to help launch Mia and Max, and do our little bit to support the life-saving work of PAHO.

The robots execute repetitive and time-consuming tasks, allowing the human team to forget about the paperwork and focus on strategic aspects of the procurement function, such as establishing the needs of the countries served by PAHO and enhancing relationships with suppliers. The implementation of Mia and Max allowed PAHO to speed up the process of providing COVID-19 health supplies, while sustaining the procurement of other vaccines, essential medicines, and strategic health supplies and equipment over the past two years. See an earlier news item about Mia and Max robots here.

Mia and Max are helping other team members with transactional tasks, so they can focus on better serving our countries. These bots are a great example of what UNICC can do to support the UN Family.

UNICC’s Robotic Process Automation (RPA+) Centre of Excellence has been delivering multiple automation solutions to over 20 UN Clients across various domains such as Travel, Finance, Procurement, HR, ICT, Healthcare, etc. The RPA team is ready to help. Please reach out to us at RPA@unicc.org for a demonstration.

On Wednesday, 9 June 2021, Manuel Nunes, Senior Business Analyst at UNICC, spoke about Robotic Process Automation (RPA) in a UN Innovation Network (UNIN) TechLearnTalks segment. Manuel described the functions and benefits of RPA, followed by Carla Ziade and Kamal Al-Khatib of the UN Economic and Social Commission for Western Asia (ESCWA) who presented a case study and demonstration of RPA in their daily operations as supported by UNICC’s Robotic Process Automation (RPA+) Centre of Excellence.

TechLearnTalks is a series of UNIN webinars dedicated towards demystifying up-and-coming technologies “without the jargon”; this was accurately reflected in the audience when a pre-webinar Zoom poll revealed that only 25% of participants had prior knowledge about RPA. This was no barrier for Manuel, who gave a brief yet comprehensive presentation on the topic, describing RPA as a self-functioning set of rules much like a self-playing piano. He continued to set out the different types of RPA and each of their specific functions: attended, unattended and citizen development. To further clarify the difference the specific RPA types have in their processes, his presentation included a visual diagram of the extent to which human oversight is needed for attended and unattended RPA bots.

In addition, Manuel dove into the various benefits of RPA; for example, he explained that its developmental origins in the finance sector is the reason for its accuracy in compliance and audit regulations, not to mention the consistency of its precision. Other benefits were the sheer hours the organization can spare with RPA bots delivering otherwise reiterative and repetitive tasks, so employees are available to take on more meaningful duties.

To conclude his presentation, Manuel touched upon the broad network of organizations for whom UNICC provides RPA services.

Following Manuel’s presentation, colleagues from ESCWA delivered a case study of RPA in action. Carla Ziade, Administrative Officer, explained that the RPA bot which UNICC had built primarily worked to automate the process of internal employees to submit travel requests within the Umoja system. She contextualised the benefits of RPA to ESCWA’s operations, stating that it boosted efficiencies, reduced turnaround times, improved accuracy and was straightforward to launch and train users in.

The entire process of submitting a request from start to finish, when completed by a human, takes approximately 15 minutes; this process is annually completed an estimated 1200 times. Our calculations present that this RPA bot will save approximately 300 hours per year for the ESCWA.

Kamal Al-Khatib, Finance Innovation Group Project Coordinator, ESCWA, then delivered the technical explanation of the RPA bot, named “Adam,” as well as the specific steps of the automation. To further establish the efficiency of the bot, Kamal prepared a visual live demo of Adam 1 (refer to 46:00 in the webinar recording).

Anecdotally, Kamal recalled the collaboration between ESCWA and UNICC to build the bot in 2019, which was during the period of social and political unrest in Beirut, Lebanon. Employees in the surrounding ESCWA offices struggled with business continuity due to factors such as lack of Internet, electricity, etc. Though the project experienced difficulties due to these external factors, Kamal stated that colleagues at UNICC, in the process of building, implementing and deploying the bot, went “above and beyond”, successfully completing the assignment.

Overall, the webinar was well received by the audience, with nearly 30 questions and comments from members of international organizations such as UNICEF, ICAO, UNV and PAHO. Question topics varied from timelines of RPA implementation to the price of the automation service, to which ESCWA colleagues lauded UNICC for its degree of efficiency for its affordability.

Though the panelists and speakers were not able to address all inquiries, much of the Q&A session evolved around the potential issues that arise in the practical applications of RPA. To address this, Manuel and Carla first explained the greatest obstacle to implementing RPA was not the automation itself but the preparation to implementing the bot. Gaining accessibility to sites and applications, streamlining processes and identifying the boundaries of the administrative tasks that needed automation were all issues that needed to be aptly addressed before building the automation.

As the webinar came to a close and the speakers wrapped up their Q&A session, one participant, in response to the remaining questions on RPA and all of its capabilities, left a comment in the participant thread: “I think a good starting point is contacting UNICC.” 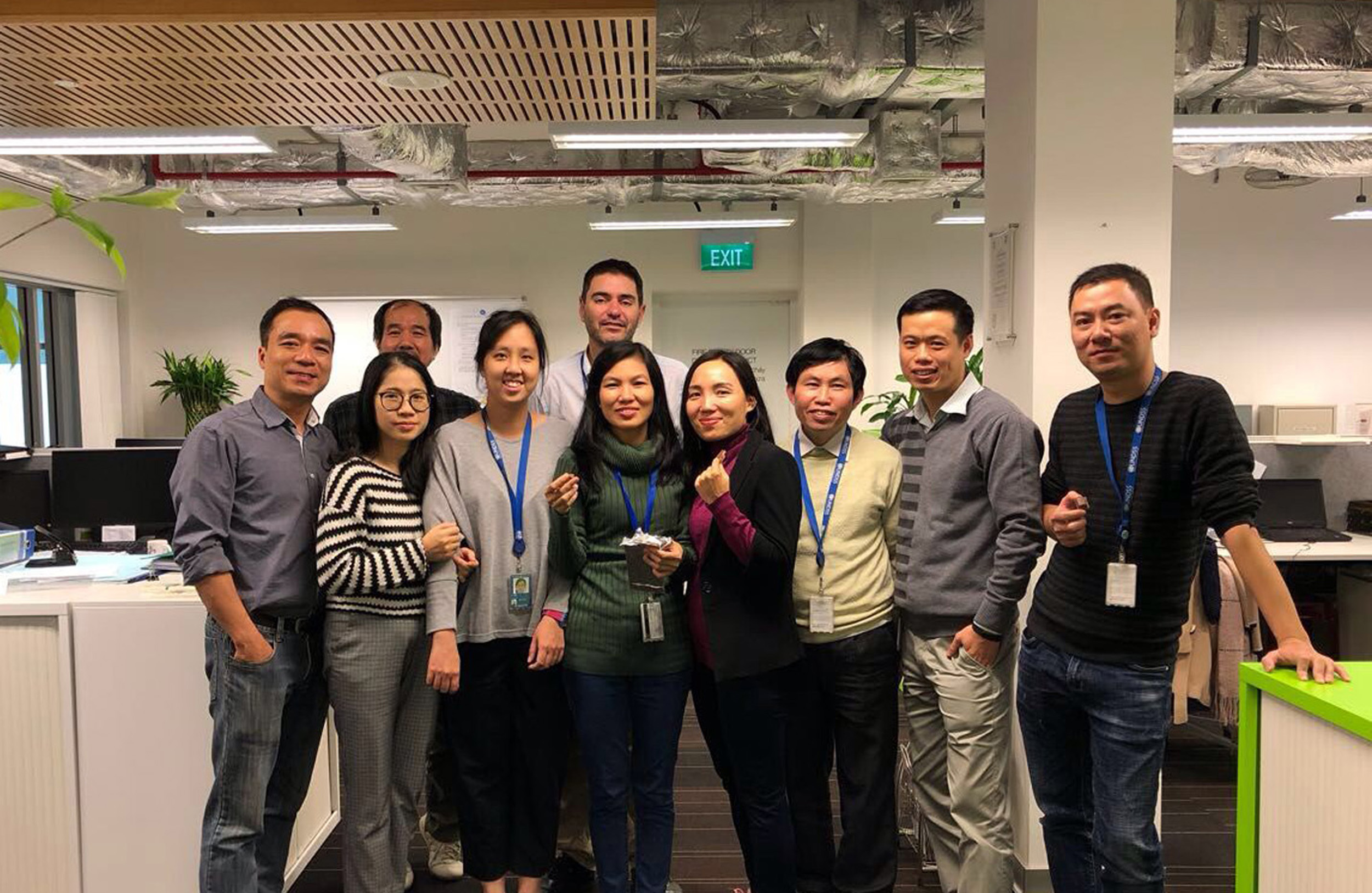 UNICC, the go-to ICT and digital solutions provider for United Nations family, has released a new suite of services across its different areas, including Client, Professional, Software, Platform, Infrastructure and Cloud Integration services.

UNICC is meeting the challenges and drivers for organisations to move to new private, hybrid and public cloud offerings, offering its Clients assessment, migration and implementation as well as fully managed operational support and cost management for a number of cloud solutions.

UNICC’s mission is to provide ICT services, maximising the sharing of ICT solutions from innovation and infrastructure to systems and skills in order to generate economies of scale. UNICC is highly competitive with today’s technology marketplace, building synergies with industry partners as well as with its Clients.

For more information about UNICC’s services read UNICC’s Services Overview and ICC ICT Services Booklet, or contact us at business@unicc.org.

On October 15, on stage with UiPath’s founder and CEO Daniel Dines, UNICC’s Director Sameer Chauhan spoke to a packed audience at UiPath’s Forward III event in Las Vegas. He engaged the audience on how automation can support digital shared services across the UN family and help accelerate the SDGs.

Sameer attended the two-day conference with Anish Sethi, UNICC’s Chief of Clients and Projects. Anish has been instrumental in setting up a first-class RPA program along with the UN Digital Solutions Center with a number of strategic partners, including major RPA vendor UiPath.

The response was overwhelming, with many private sector groups expressing their interest to help the UN family wherever they could. They offered resources for given projects and expertise in how to develop a Centre of Excellence, widening the web of partnerships between the private and public sector that will make a difference in meeting the SGDs. Indeed, SDGs Goal 17 is all about such partnerships.

The studies we conducted internally in the UN showed us that even if 10% of all of the manual processes we have in our back office are automated or digitized that could potentially save us up to a billion dollars that can then be used to deliver to the substantive missions. So that’s a billion dollars more that can go towards educating kids, taking care of medical disasters, hurricanes and refugees. It becomes a game-changer for us.

In a session driven by UiPath’s founder and CEO Daniel Dines, Sameer had the opportunity to share the mission and mandates of the UN family. He also discussed UNICC’s RPA service and mandate to offer shared digital solutions for UN Agencies. He emphasized the benefits including maximised ROI and economies of scale as well as its domain expertise in understanding its UN partner.

Sameer went on to explain that with an expected rapid adoption of automation in the coming years, the UN could free up to a billion dollars from operational efficiencies that can be reallocated to mission delivery to address key challenges, from educating kids to taking care of refugees.

The goal of the service is to help the UN family reduce duplication of common processes and minimize time spent on manual processes. Together with its strategic partners, UNICC provides a one-stop-shop to facilitate fast adoption of the latest digital technology.

Robotic Process Automation (RPA) is a key enabler of Digital Transformation across the UN family. It allows automating repetitive manual processes and can save the UN millions of dollars crucial to accelerating the SDGs and creating tangible global social impact.

Automation is also one of the key services that will be delivered by the UN Digital Services Center (UN DSC), an innovation hub recently established by WPF, UNHCR and UNICC. It will design, build, and deploy at scale a suite of digital services that will be available to all UN agencies. The UN DSC includes a Robotic Operations Centre (ROC) and the first automation pilot project is already up and running.